After more than half a century of civil war, Colombia’s young people are sending letters of hope to guerrilla fighters to help them re-integrate into society. Read More 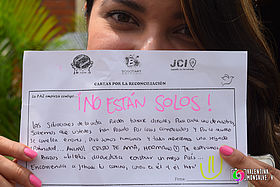