Margaret Mead once said: “Never doubt that a small group of thoughtful, committed citizens can change the world; indeed, it's the only thing that ever has.” Mead seems to perfectly express the sentiment that inspired the citizens of Tangier to start an inventive initiative to decorate their neighbourhoods to create more beautiful living environment.

Known to Moroccans as “the bride of the north”, Tangier is a charming city in northern Morocco. On top of a hill overlooking the port and the Strait of Gibraltar, it is best known for its fascinating beaches, magical, historical places, and very welcoming inhabitants. These claims to fame were apparently not enough for some residents of Tangier though, who decided to add a few more reasons to love their city.

Last year, in 2016, residents of some of the oldest and most famous neighbourhoods launched an initiative that gradually spread to other districts and ultimately turned the entire city into a breath-taking verdant garden. With its narrow, winding alleyways, the historical old town of Tangier has traditionally had few green spaces. Today though, pots of flowers decorate the streets, while colourful facades and wonderful paintings brighten up houses and walls.

It all started in a small quarter – in Al Atlas street in Souani – whose inhabitants wanted to take better care of their space. They were inspired to add more life to the streets by painting murals and adding colourful plants. It turned out so well, soon people from other quarters joined in and began transforming their spaces using very simple means to great effect.


“In the beginning, my brother designed a vision of the neighbourhood using Photoshop to show what it would look like if we added some paintings and flowers,” one of the initiators of the initiative recalls. “The idea was enthusiastically welcomed by the neighbours and they decided to make it a reality.” No political parties or associations were involved, and residents even funded the initiative themselves. “To finance it, we created a fund where everyone could voluntarily contribute a small amount of money, however much they could afford.”

As the idea was implemented in almost every neighbourhood of the city, it captured the attention of the press and social media. Four neighbourhoods have even won the “Grand prix Ibn Batouta des initiatives environnementales” (Ibn Batouta Award for Environmental Initiatives) from Morocco’s Observatory for Environmental and Historical Monuments, and Tangier itself was nominated the cleanest city in northern Morocco by the same institution. Now its residents have even more pride in their lovely city. 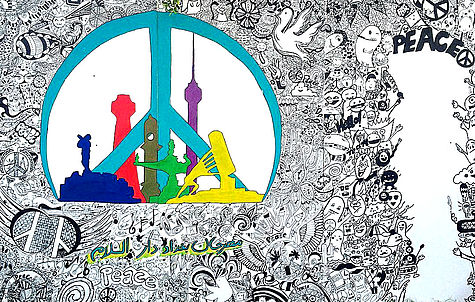