Are you working on an exciting project? Dedicated to a good cause? Here’s how you can bring others on board! Read More 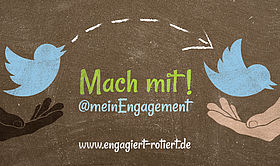