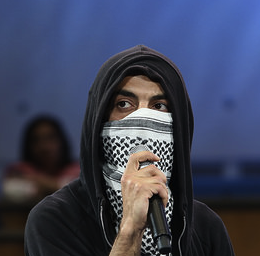 Mohamed is a graffiti and animation artist from Yarmouk Camp, the largest Palestinian refugee camp in Syria, and the creator of the graffiti character "Zaytoun, the little refugee". After leaving Syria in 2009, Mohamed now lives in Madrid, Spain. With his comic character Zaytoun, Mohamed wants to raise awareness for the situation of Palestinian refugees in Syria through a streetart and online comic project. Together with a group of friends, the Zaytoun gang, the character is now being animated and will come to life in the video game "Zaytoun, the little refugee" in December 2015.